Those crazy folks over at Puck Daddy have taken the axe to those failing markets that can't sustain professional hockey. Despite Gary Bettman’s best efforts, hockey is never going to catch on in places like Toronto, Montreal, and Winnipeg. In fact, under advisement from NBC sports we are sure; they have eliminated every single team from Canada. They have taken the league down to 15 teams, all from tv friendly big US metro Areas. See their “work” below: 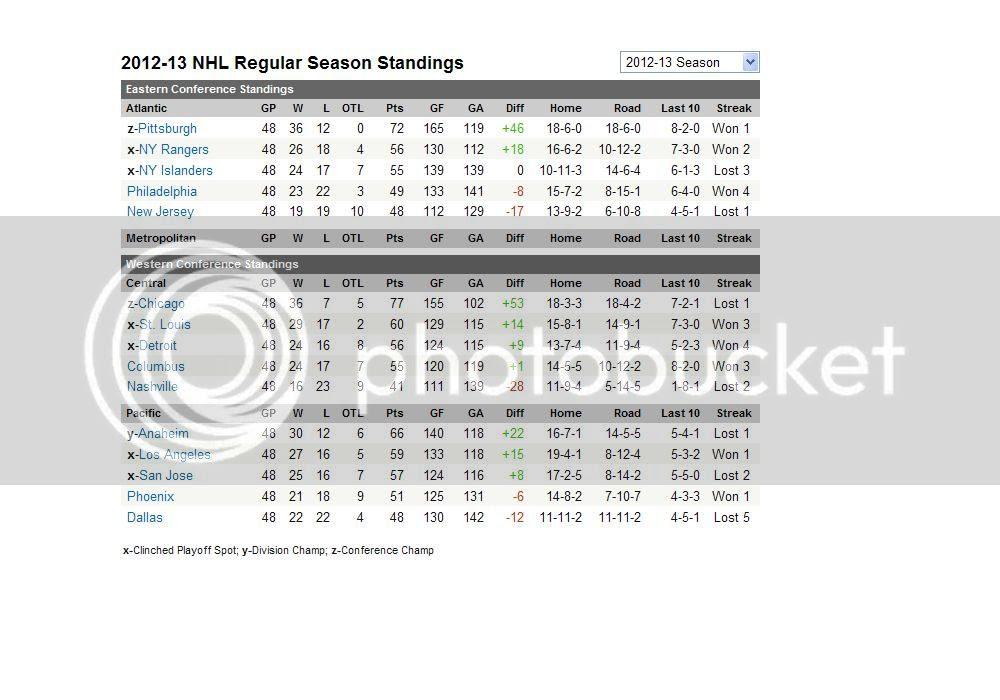 Things looking up for Obama?

The stock market is reaching record highs, unemployment at dec 08 levels, wars in Iraq and Afghanistan are winding down. A lot of work left to do, but things are headed in the right direction on a macro level.
Posted by Pucks_and_Pols at 6:11 PM No comments:

Pat McCrory, gov of NC, condescends women protesting his policy with a plate of choclate chip cookies. Cant make this stuff up.Offering women who wish to debate healthcare issues a literal symbol of domestic servitude is a perfect symbol of some wings of the GOP.
Posted by Pucks_and_Pols at 5:49 PM No comments:

Email ThisBlogThis!Share to TwitterShare to FacebookShare to Pinterest
Labels: Mass Movements
Test from phone post
Posted by Pucks_and_Pols at 5:26 PM No comments:

Inside two sides of the GOP

The most fascinating thing in politics right now is the infighting int he GOP as they try to find themselves and regroup after being rebuked by voters in 2012. It wasn't exactly a landslide election for the Dems, but considering the state of the economy and mood of the country, the failure to unseat Obama was massive one.
Now we see two different approaches moving forward. One, best exemplified by Governor Chris Christie of New Jersey is to moderate extreme stances on social issues and relent on the manaical assault on the credibility of government as a whole. Make no mistake, CC is still conservative, but he is strategic and effective as a con governing a very blue state. He has established great cross party cred and is well liked across the political spectrum, something few others in the GOP can say.
The 2nd approach to being rebuffed is best shown by Kentucky Senator Rand Paul. The js from the bluegrass state and scion of the biggest name in libertarian circles has lead the charge from the teaparty/isolationist wing of the GOP base. In contrast to "establishment" pols like Christie, Paul sees government and corporate synergy as a huge problem and has launched a zealous crusade against the growth of big government and big business in the name of individual liberty. His support is more fevereant than Christie, but unless he can expand his message beyond the older, predominatly white, fox news watching crowd, his method of doubling down on isolationist conservatism is doomed to fail at the pols.
And that is not just my idealogical opinion, it is a demographic certainty in 21st Century America.
Unless they can broaden their tent to draw in more young people, the lgbt community, and minorities, who are currently shunning the GOP in astonishing numbers, the 2010 midterms will stand as the highwater mark of Paul's brand of libertarian conservatism. The Tea Party will surely be remembered fondly for generations by those politically left behind, similar in a manner as Pickett's charge was (and is) viewed by those with confederate sympathies after the civil war. The high water mark of a glorius lost cause for a demographic out of time, out of power, and out of new ideas.
Posted by Pucks_and_Pols at 5:12 PM No comments: